Lily took a walk on the gluten side

Lily took a walk on the gluten side 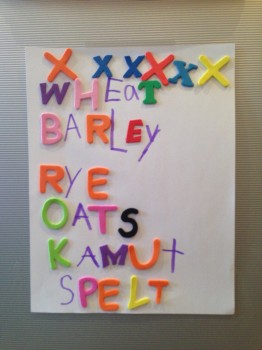 Lily got glutened last week and then again last night. This is what happened.

Last week she had an impromptu play date after school at a friend’s house. She didn’t eat one of the snacks that I had packed her for school so I sent it along so she would have something to eat. When I picked her up, she told me that she ate the best gluten-free snack and I had to buy it because it was so super yummy. She said she remembers it from before she went gluten free. (I’m thinking that sure is a lasting impression because she was diagnosed with celiac when she was 3!) Now they have a gluten-free version, she said, and we have to get it! I was excited that she was so excited about this new delicious gluten-free snack. She said that the package was in the garbage because all the kids had finished them off. A gluten-free snack scarfed up by all the kids! This must really be good. I asked her friend’s caregiver if I could see the package. Out of the garbage can came a box of Tofutti Cuties. Wow, I thought, they’ve made a gluten-free version?!! It’s not every day you see a gluten-free ice-cream sandwich, even if it isn’t made with real ice cream.

I quickly scanned the box for the “GF” words, those two words that Lily knows so well how to spell and read. Nowhere to be found. I turned the box over and went straight to the ingredient list. The first ingredient of the chocolate wafer: unbleached wheat flour. My heart skipped a beat. I kind of freaked out a bit on the inside but I didn’t want to freak Lily out so I tried to remain calm.

“Honey, those aren’t gluten free. Look at the box. Do you see the words gluten free anywhere?” It was a perfect teaching opportunity. We went home, got out the stickers and markers and reviewed how to spell and read “gluten free.” Then we made a DO NOT EAT list of the most common ingredients that contain gluten. I helped Lily spell the words and we hung the poster in our kitchen and now every day she sees the words and reads them aloud.

That night when we lay in her bed, with a towel by her side in case she threw up (which is how she most commonly reacts a few hours after eating gluten, along with a stomach ache, headache and fatigue), Lily said softly, with a smile: “That ice-cream sandwich tasted really good.” I don’t think she ate it on purpose knowing it contained gluten, but she sure did enjoy it. She didn’t throw up that night but the next day she woke up with a tummy ache and head cold. I kept her home from school and we had a tea party, watched a movie, coloured and just hung out as the gluten worked its way through her body. She drank lots of water, had some probiotics and got a gentle tummy massage from her mama. Every time we passed by the poster hanging in the kitchen, Lily read the words. Usually in our family we focus on all the things that you can eat when you’re gluten free. But sometimes it’s got to be about what you can’t eat.

Last night Lily got glutened again. We went to my girlfriend’s house for dinner. God bless this friend of mine, she inquired about what Lily can and can’t eat, went over the menu with me, read me recipes and ingredient lists. We were both confident that we had covered every aspect of the meal and that it would be safe for Lily to eat. Steak, check (we discussed seasoning)! Spinach and carrots, check! Quinoa, check! My thoughtful friend even bought two kinds of gluten-free crackers! Dessert (we made coconut brownies), check! 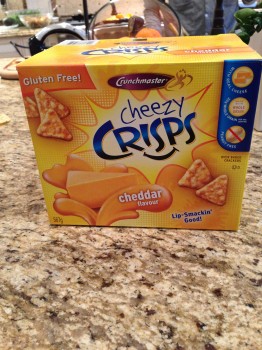 My friend bought these tasty Crunchmaster Cheezy Crisps at Costco! 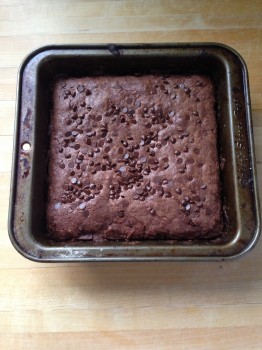 These homemade Coconut Brownies were a hit! Gluten free and dairy free!

We all ate and thoroughly enjoyed our delicious dinner. The Caesar salad dressing was soooo good that I asked my friend for the recipe. She emailed it to me this morning:

Who knew? Worcestershire sauce in salad dressing? I didn’t think to ask what was in the salad dressing! It looked like olive oil and tasted like garlic, cheese, lemon. I couldn’t remember if Lily had eaten the salad (she’s not a huge salad fan), but after the second phone call I received from her school today telling me that she was complaining of a stomach ache I supposed that she did. When I picked her up, I casually asked if she ate the salad. She said a bit. That’s really all it takes for Lily. She just woke up (it’s 12:30 am), her stomach still hurting. And now she’s lying in my bed next to me. My poor, brave girl.

Can you spell WORCESTERSHIRE?

P.S. You have to try the salad dressing! You can either use gluten-free Worcestershire or skip this ingredient altogether.

P.P.S. If you are reading this, girlfriend, please don’t feel bad!