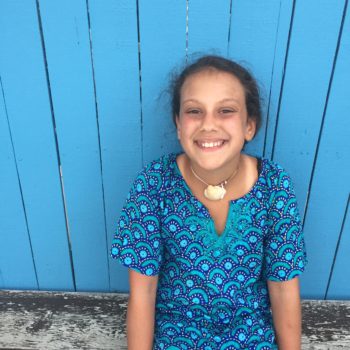 A few things about her:

She likes to read, draw and swim.

She takes dance lessons (hip hop) and plays on a basketball team.

She has a younger sister who is the bomb.

She loves her tiny dog Chiquita.

Her favourite subject in school is math.

She has celiac disease. She was diagnosed when she was three.

On the morning of her 11th birthday, Lily woke up with a stuffy nose. When asked what she thinks it means to have a cold on her birthday, she replied, without missing a beat: “It’s going to be a SICK year!”

That’s Lily, always making lemonade out of lemons. See for yourself.

What is celiac disease?
It’s a disease that affects your gut [specifically your small intestine]. What happens is when you eat gluten, it doesn’t sit well with your gut and your body gets angry and tries to get it out. Some people have symptoms and there are many different kinds of symptoms—I throw up, get bloated and get bad stomach aches. Some people don’t get symptoms, but it’s still doing damage inside of them.

[For a more complete definition of celiac disease, go to www.celiac.ca]

What is gluten?
It’s a protein that’s in found in certain grains, like wheat, rye, spelt, kamut and barley. When I was younger my mom and I made a sign out of stickers with these words and taped it up in the kitchen to help me learn how to read them. It’s really important to read ingredients and not just assume something is safe to eat, unless it’s a fruit or vegetable of course. 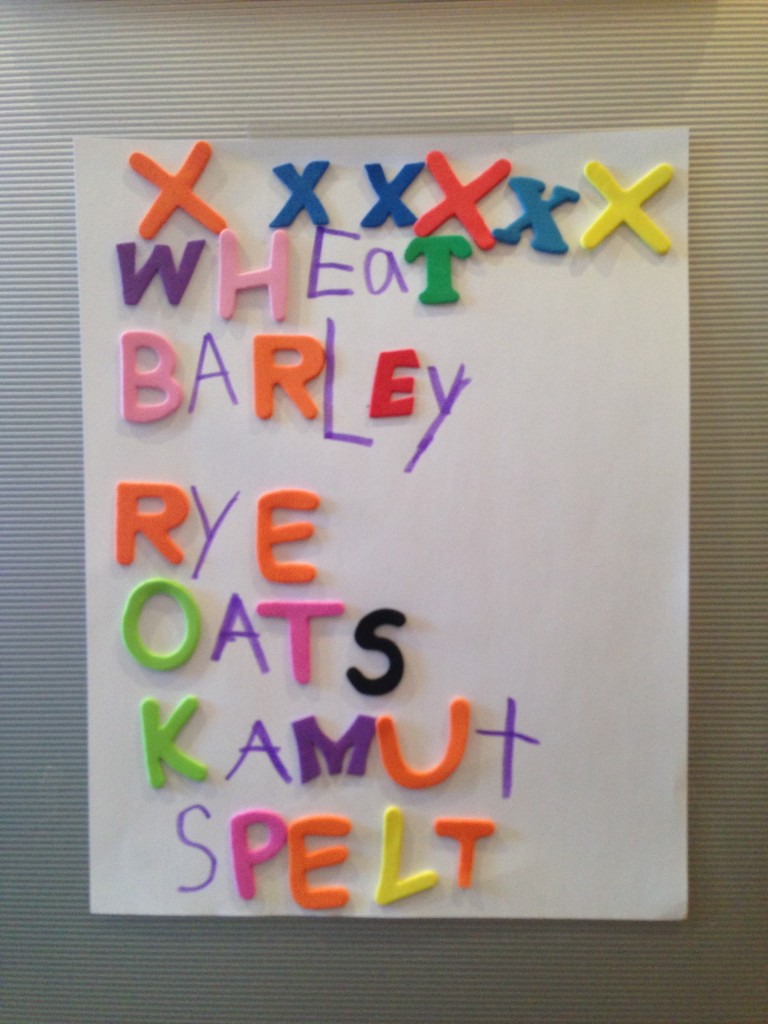 Do you remember when you found out you had celiac?
I was only three, so I didn’t really know what was happening to me. I was getting sick (barfing) every night and I had lots of stomach pain. Then I remember one day we were at the doctor’s office and I was getting my blood taken. That’s how we found out I have celiac disease. After I stopped eating gluten I felt much better. My hair started to grow and I started to grow. END_OF_DOCUMENT_TOKEN_TO_BE_REPLACED 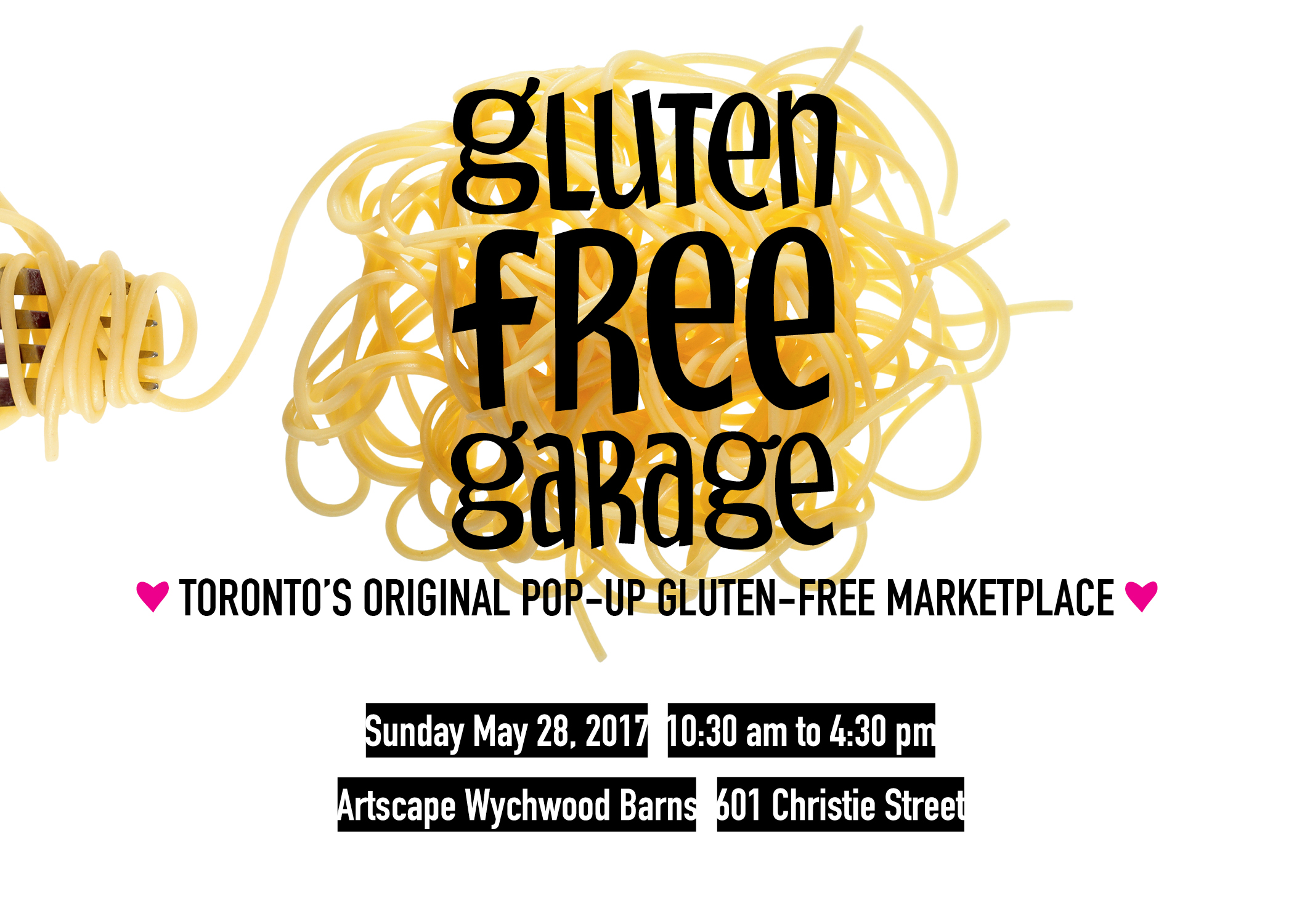 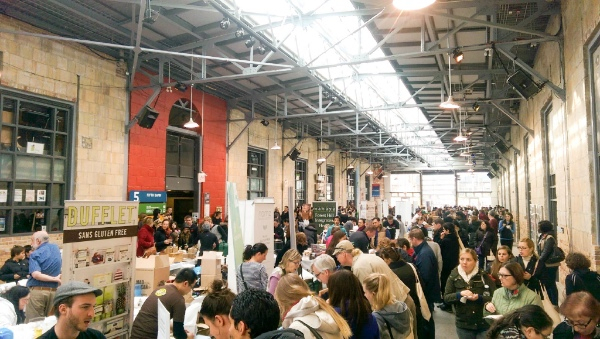 Toronto’s highly anticipated go-to gluten-free event is a prominent playground for gluten-free people looking to discover new brands, try different foods and meet fellow foodies. Carefully curated for people with celiac disease and gluten intolerance, GLUTEN FREE GARAGE places quality and taste at the forefront, allowing it to be experienced by all food lovers as the perfect, most delicious way to celebrate Celiac Awareness Month. 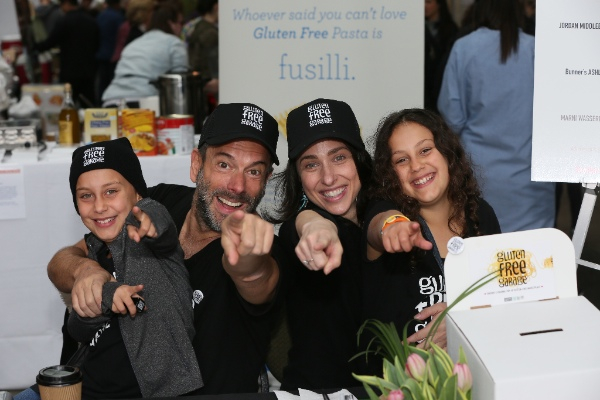 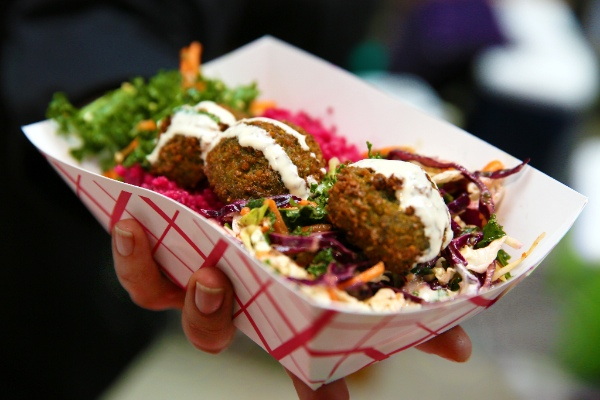 More than 60 handpicked vendors (mostly local and artisanal) will offer attendees a wide variety of gluten-free options appealing to different tastes. Indulge in freshly baked goods—such as bagels, scones and baguettes—that you never thought could taste so good. Enjoy savoury made-to-order foods—like falafel (pictured here from My Little Chickpea), tacos and dumplings—for lunch. Sample and purchase sweet and savoury snacks, sauces, soups, pizza, pasta, gelato and even skincare! Not just for people with celiac disease and gluten intolerance, GLUTEN FREE GARAGE offers something for everyone on the gluten-free spectrum—meat eaters, vegetarians and vegans alike. Come hungry for a delicious day of one-stop shopping and taste for yourself how gluten free has come a long way, baby! 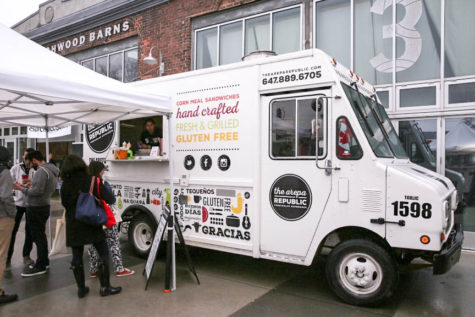 Take advantage of the opportunity to eat al fresco from a food truck on the Wychwood Barns grounds. Participating trucks include 50 Pesos and Bar Ape.

LIBATIONS IN THE COURTYARD 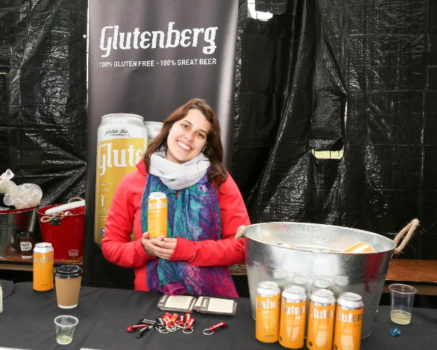 Those who are 19+ can partake in Libations in the Courtyard, featuring tastings from various beer, cider and vodka brands. There is still space at the bar for additional beer and cider brands. Send a note to info@glutenfreegarage.ca for information on how your brand can participate. 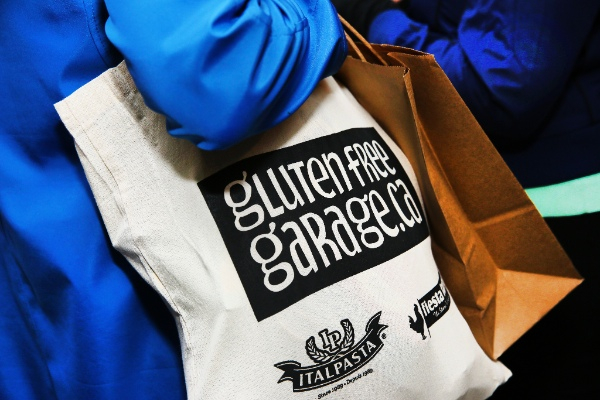 Not all brands are able to exhibit at GLUTEN FREE GARAGE, so there’s an opportunity to offer festival-goers the chance to discover and try new products through sampling. Ask about how your brand can get involved. 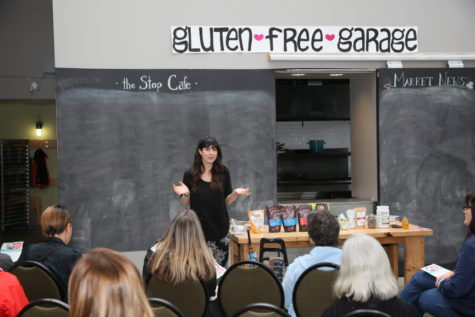 Take a break from eating and tune into a talk or live demonstration in The Stop. Past speakers include holistic nutritionist Joy McCarthy, Bunner’s Bakeshop cofounder Ashley Witting, gluten-free expert Kathy Smart, and celiac advocate Jordan Middlebrook, aka King Gluten Free. This year’s speakers will be announced soon. 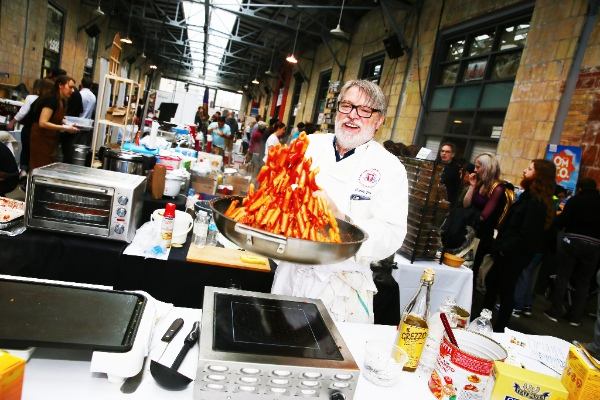 The success of GLUTEN FREE GARAGE is made possible with the continued support of our sponsors. This year we welcome back Italpasta, Neal Brothers and Fiesta Farms and are excited to have Ste. Anne’s Bakery on board! Thanks also to the Gluten-Free Certification Program for their ongoing support! 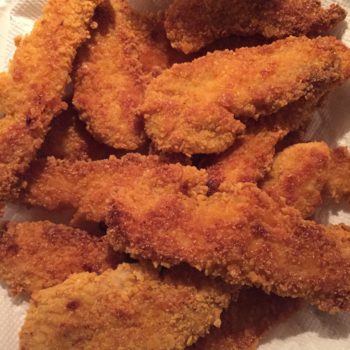 In grade 8, when I made friends with the new girl at school, I discovered a culinary sensation.

Every Friday after school my BF Bonnie and I would race to her house and wait in her kitchen for the delivery. Her grandfather Jimmy would pull up in the four-door sedan to drop off the food that Bubby Katy and her sister-in-law Rosie had spent all day cooking and baking. Jimmy would shlep boxes from the car filled with still-hot home-cooked food from the old country covered in tinfoil for Friday night dinner. The women had cooked the meal and it was the same every week: chicken soup, goulash, chicken paprikash, Bubby’s chicken (breaded chicken strips) and Rosie’s squares (a dessert made from ground almonds and chocolate, referred to by those in the know as simply “Rosie’s”—to this day, I dream of Rosie’s). It was his greatest joy to drop off this food for his children and grandchildren (and his granddaughter’s bestie).

Bubby’s Chicken was everything: tender on the inside, crunchy on the outside, flattened and crispy-coated strips of chicken that had been cooked in a vat of oil and then patted dry with paper towel. I will never taste a chicken finger like that again.

END_OF_DOCUMENT_TOKEN_TO_BE_REPLACED 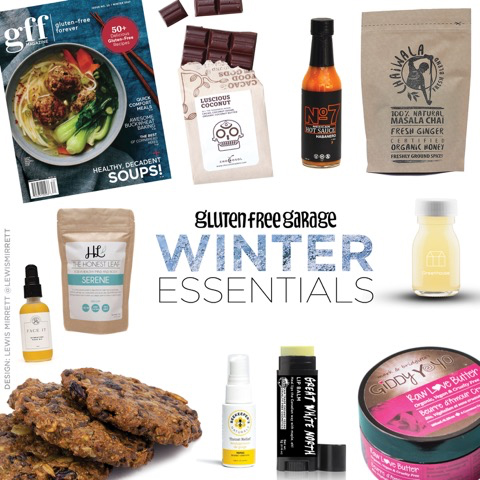 Our list of 11 must-have products to keep you going all winter long. All are GF, of course! And all except for one are made in Canada.

READ IT
GFF (Gluten-Free Forever) Magazine. The gorgeous winter 2017 issue has six delish soup recipes to warm you up. We could eat up every issue of this quarterly magazine. gffmag.com (get $9 off the $35 subscription price with code winter17)

SAVOUR IT
Chocosol Traders Luscious Coconut (70% cacao). Because chocolate and coconut. This stuff is the real deal. chocosoltraders.com

HEAT IT UP
No.7 Mexican Hot Sauce. Spice up your food and clear your sinuses with habanero or a variety of other hot numbers. no7hotsauce.com

RUB IT IN
Giddy Yoyo Raw Love Butter. Slather on this body butter from head to toe to keep your skin soft and supple. Oh, and it’s edible and tastes like chocolate. shop.giddyyoyo.com

SEAL IT WITH A KISS
Sudsatorium Great White North Lip Balm. Kiss cracked lips goodbye because this balm is the bomb. As per the packaging: “Heal lips the Canadian way with maple syrup, eh!” sudsatorium.com

EAT IT
Bunner’s Bakeshop Supersonic Cookies. The cookies that helped launch Bunner’s! Loaded with chocolate chips, cranberries, pumpkin, sunflower and flax seeds, these GF vegan wonders are a must-eat any time of year. My fave mid-day treat with a cup of hot tea. bunners.ca

FACE IT
Aromacentric Face It Oil. Just a few drops of this liquid gold hydrates and nourishes your skin so you shine. With essential oils neroli and jasmine, you’ll also smell divine. aromacentric.com

SIP IT
The Honest Leaf Serene Tea. Make way for sweet dreams with this caffeine-free mint tea that takes the chill off and calms your mind and body. honestleaf.com 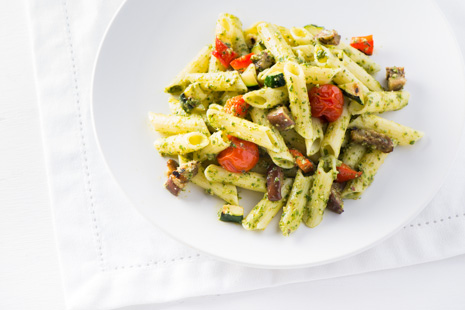 This pasta salad is perfect for vegans and vegetarians.

Instructions
Preheat a grill over medium high heat. Toss red pepper, zucchini, cherry tomatoes, and eggplant with 1 tablespoon olive oil, and salt and pepper in a grill basket. Arrange basket on the grill and cook until charred and softened, about 15 minutes.

Meanwhile, cook pasta in a large pot of boiling salted water until al dente, about 6-8 minutes.

Italpasta is a Gold sponsor of Gluten Free Garage.