a decade of celiac disease

a decade of celiac disease 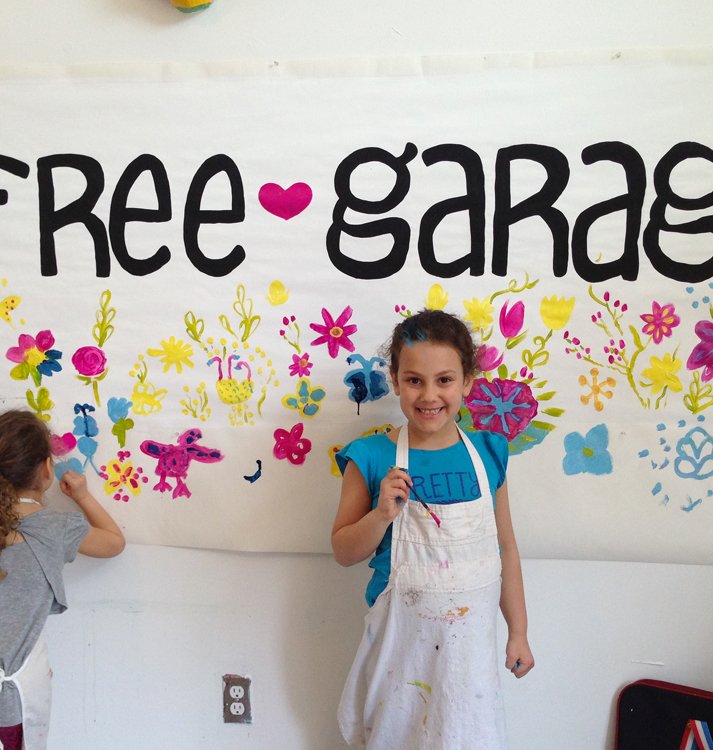 May is Celiac Awareness Month! To kick it off, we want to spread some awareness about celiac disease. When I say “we,” I actually mean my daughter Lily—otherwise known as the Gluten Free Garage muse—who was diagnosed at age 3. Now 13, she has been living with celiac disease and living her best gluten-free life for one whole decade. That’s so hard to believe because I remember the day she was diagnosed like it was yesterday. But, I’ve got to admit, gluten free has come a long way since then!

I started Gluten Free Garage when Lily was 5. I told her it was going to be a big party where she and other people who were gluten free could eat whatever they wanted without worrying that they’d get sick. She was all for it and GFG quickly became her favourite day of the year. Every year she would beg to be a guest speaker. She was relentless. Finally, in 2017, when Lily was 11 years old, I agreed to let her lead a speaker session. In a match made in gluten-free heaven, Almond Butterfly Bakeshop sponsored it and led a cupcake decorating workshop after her talk.

This year, I was going to ask Lily to write something commemorating her decade of celiac disease. I decided to re-read her GFG talk from two years ago and realized that it holds up pretty well. She thought so, too. Upon reading it again, I was kind of blown away by the fact that she wrote this two years ago. She did most of it herself and asked me to help her with the scientific bits about the disease.

Here it is, “The Top 10 Things I’ve Learned from Having Celiac Disease” redux, from the mouth of my gluten-free babe. We hope you can glean something from it. We hope it inspires you. And, if you have a child with celiac disease, we hope you share it or read with him or her! 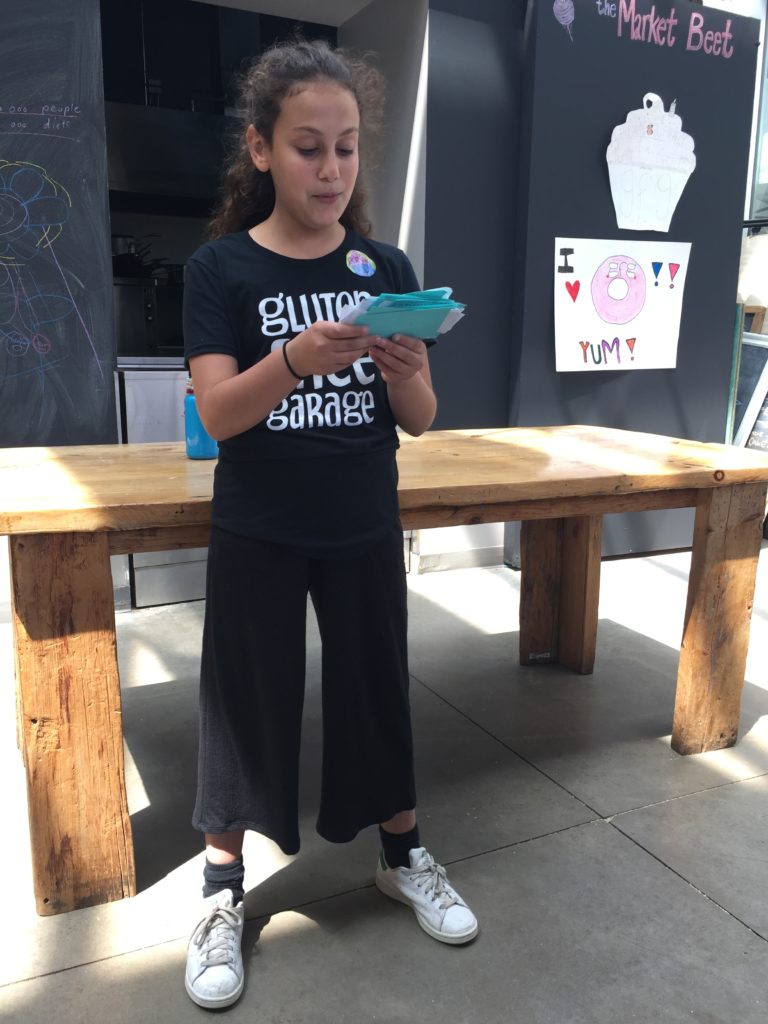 Lily speaking to a packed house at her guest speaker session at GFG in 2017.

The Top 10 Things I’ve Learned from Having Celiac Disease

Hello, my name is Lily Eklove. I’m 11 years old and I have celiac disease. I was diagnosed eight years ago, when I was 3. Today I’m going to talk to you about “The Top 10 Things I’ve Learned from Having Celiac Disease.” Let’s start from the beginning, but first, here’s a joke.

Why did the gluten-free person cross the road?
To go to Gluten Free Garage!

1. What is celiac disease?

Celiac disease is an autoimmune disease. When someone with celiac eats even a crumb of gluten, it causes an immune reaction that damages the organ in your body called the small intestine. The small intestine has lots of small structures that look like fingers, called villi, which help the body to absorb nutrients. In someone with celiac disease, gluten attacks the villi and causes them to become flattened or injured. When this happens, your body can’t absorb any nutrients and, over time, you can go on to develop some serious health issues, like infertility, neurological problems and even cancer.

There are more than 300 symptoms related to celiac disease. When I was diagnosed, I was on the verge of being anemic because my body wasn’t absorbing iron from the food I was eating. [Anemia is a condition in which you don’t have enough healthy red blood cells to carry adequate oxygen to the body’s tissues.] It made me feel tired all the time so I took a lot of naps. My other symptoms were that I was super bloated and I had tummy aches. And then I started throwing up a lot, which is why my parents took me to the doctor. Also, my hair wasn’t growing and neither was I.

The good news is, once I went gluten free, my tummy and my whole body started to heal and my hair started to grow (as you can see).

The only treatment for celiac disease is to not eat any gluten. Which brings us to…

Gluten is a protein in certain grains like wheat, rye, barley, spelt and kamut. It can also be found in oats through cross-contamination, which is why it’s important to eat only oats that are labelled uncontaminated. The thing that sucks is that gluten is mostly found in foods like pizza, pasta, bread and pastries, because these products all contain flour commonly made with grains that contain gluten. But, thankfully, we now have gluten-free flour to make all these foods safe and possible for the gluten-free people of the earth to eat! Gluten can also be hidden in other less-obvious products, like salad dressing, sauces, cooking sprays and even licorice, which is why it’s really important to read ingredient labels.

3. How gluten affects me.

Just a warning: This is going to be a TMI story.

When I eat gluten—by mistake, obviously—it usually takes about two hours for my body to react. What happens to me? OK, here it comes, are you ready? I can’t skip this part, I’m here to give you information.

My stomach gets so bloated like there’s a big beach ball in it. I get excruciating stomach pains, like somebody’s karate-chopping me from the inside. And then I throw up, a lot, until there’s nothing left. I’m usually in the bathroom for about four hours. Then I fall asleep. One time at a friend’s cottage when I got glutened and went through the whole ordeal, my dad’s friend came into the bathroom when I was lying on the floor and said to my parents: “I didn’t think our kids would be passed out on a bathroom floor until they were in university.”

For the next couple of days after I get glutened, I feel tired and kind of out of it and sometimes my tummy still hurts.

This is how gluten affects ME, but everyone with celiac reacts differently. Some people with celiac don’t have any reaction to gluten, they are called “asymptomatic.” But even though they don’t get sick, eating gluten is still doing damage to them on the inside, which may be worse than having a reaction because at least if you have a reaction, you know you’ve eaten something with gluten…but I’ll let you decide.

4. When it comes to taste, not all gluten-free foods are created equal.

If you eat a really good cupcake at one place (like Almond Butterfly, for example), don’t assume that the cupcakes at another gluten-free bakery will be as good or even good at all. This can also work the other way around. When I was diagnosed my parents made our entire house gluten free. We tried so many different products because, to be honest, some gluten-free foods taste like cardboard. As my mom says, it’s all about trial and error.

5. Gluten-free foods are not more or less healthy than foods with gluten.

It all depends on what you eat. If you’re eating lots of processed foods and gluten-free cookies and donuts and cakes, it’s not healthy. Dessert is dessert. Treats are treats. Some gluten-free foods contain lots of sugar and other stuff that isn’t good for you. The best gluten-free foods for you are the ones that are naturally gluten free, like fruits, vegetables, legumes, nuts, seeds, cheese, yogurt…you get the picture. If you’re a carnivore like me, there’s also chicken, fish and meat. Bottom line: The gluten-free diet is medicine for people with celiac disease.

Cross-contamination happens when a food that is gluten free gets contaminated with gluten because of the way it is prepared or cooked. I absolutely hate getting cross contaminated. I get so constipated and can’t get it out for days. My tummy hurts, I don’t feel like eating, and I’m so uncomfortable. It’s the worst feeling. So how can I make sure that I don’t eat a food that is cross contaminated? I have to speak up. For instance, when I go to a restaurant even if it seems obvious that something is gluten free, I have to ask the waiter how it is prepared (to be honest, most of the time my mom asks but I’m learning by listening to her). Let’s take French fries. Most of the time, fries are naturally gluten free, unless they’re coated in flour. If they’re made in a fryer where other foods containing gluten are also fried, then they are not officially gluten free because the oil is contaminated. The fries will be cross contaminated. Trust me, this happened to me on vacation. If your waiter isn’t sure, ask to speak to the chef or manager. Don’t be shy—this is about your health. Which leads us to our next lesson:

This is the voice that asks questions and speaks up, even when I don’t want to make a big deal or bring attention to myself. In order to be healthy I have to find my gluten-free voice so I don’t get sick from the food I eat. Sometimes I get embarrassed when we eat out and my parents ask all kinds of questions, but I know that one day I’m going to have to ask those questions myself.

8. When in doubt, don’t just trust your gut.

That’s right, I said DON’T!!! If there’s ever a situation where I’m not 100% percent sure if I can eat a certain food and the person who prepared it isn’t sure, I won’t assume that I can eat it, even if it’s something that looks insanely good. GET THE FACTS by asking questions and reading ingredients, which you always have to do. Do not just trust your gut because if there’s a 50-50 chance, there’s a good chance that you can eat it but there is also a good chance you can’t and then you’ll end up getting sick, which, trust me, is NOT worth it.

When I go to birthday parties or sleepovers, most times I have to bring my own dessert or snack and don’t get to eat what everyone else is eating. You might think this would make me feel sad or lonely or left out, but it doesn’t. We are all different from each other and just because I have to eat different foods doesn’t make me weird or freaky. It’s ME that makes me weird and freaky! Besides, I can basically have the same foods as everyone else, just the gluten-free version! My diet doesn’t define me. It’s part of me, but it’s not ME.

10. Good things can come from bad or not-so-great things.

I feel lucky that I was diagnosed at such a young age before any serious damage happened to me from eating gluten, because for most people it takes an average of six to 10 years before getting a proper diagnosis. I won’t lie, getting diagnosed with celiac disease was a bummer. But, if I didn’t have it, Gluten Free Garage wouldn’t exist and YOU wouldn’t get to come and enjoy all the yummy food! 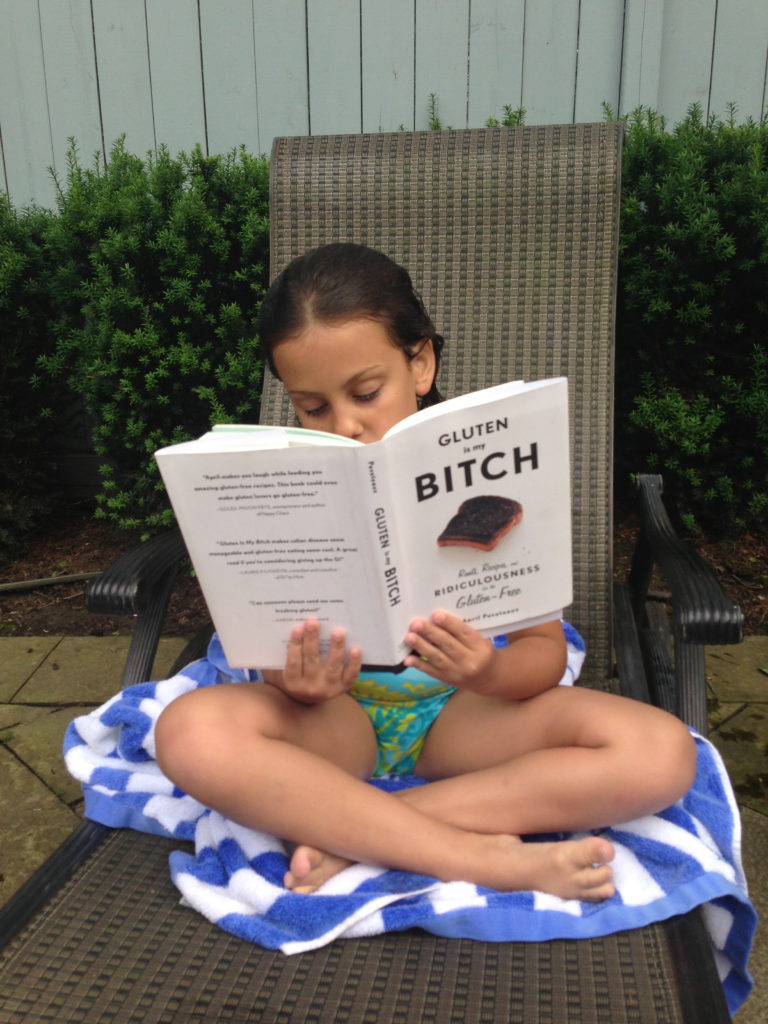 This year at Gluten Free Garage we are running two speaker sessions about children with celiac disease:

We will also have a meetup for parents and kids in the Kids Courtyard (sponsored by Fiesta Farms) with cookie decorating courtesy of Hype Food Co. and other activities. Follow @glutenfreegarage on Instagram for updates.